Catawba Falls is located just off of I-40 in the Pisgah National Forest, near Old Fort, in McDowell County. Despite its’ being on National Forest property, however, the falls has long since been off-limits to the general public due to the only reasonable access trail being on private property. But good news! Recently, the Foothills Conservancy bought the 23-acre tract over which the access trail passes for $400,000.00, on a loan. A temporary access agreement with the County was put in place, and since then the public has been allowed to access the fails simply by parking at the end of the road and walking up the trail.

More recently, a Federal house bill has been passed that will allocate the funds for the US Forest Service to acquire the land from the Nature Conservancy, thereby paying off the loan, and possibly develop a larger parking area for public access. Since this news was released mid and late last year, I’ve put the falls high on my list for a visit – and it was well worth the wait. Catawba Falls is a beautiful, multi-charactered falls with two distinct sections – a wonderful addition to the selection of trails and hikes available in Western North Carolina.

The trail begins at the end of Catawba River Road off of I-40, at the bottom of the Old Fort grade (directions on Google Maps). On the day of my most recent hike, there was still a good 6″ of ice and snow on the ground from two recent winter storms in late 2009 (the major snow of December 18th and the big ice storm Christmas morning). The trail was muddy where there was no snow, and it was actually easier to walk on the crunchy snow than the places where the trail was clear!

The trail is mostly level at first, and I noticed that it followed an old power line (which is down in places). The trail starts on the left side of the creek but eventually you must cross to the right side where it continues. There is one place where it is possible to rock-hop, but it was above boot level with the high water. Upstream from that, at the old powerhouse, was a slippery log which I was able to use as a makeshift bridge. It still had snow and ice on it, so it was tricky at best. Expect to get wet on this crossing if you come after wet weather! 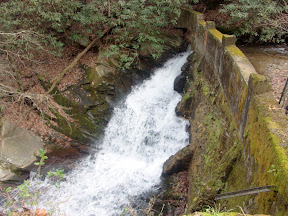 After you cross, the trail follows the creek upstream on a gentle grade at first, then a moderate climb. You will pass by the ruins of the dam that supplied the old power house (seen here). The trail drops off steeply to a cascade below the dam, so be careful. This creek used to be the sole power source for the town of Old Fort.

Beyond the dam, the trail climbs a bit more steeply before making another creek crossing. That crossing is an easy rockhop. Next, the trail comes out in a dry wash. Cross to a rocky “island” in between the wash and another creek crossing, and cross that as well. This second crossing was tricky again on my last hike – a big hemlock log makes a good bridge but it too was snow and ice covered.

The trail then continues uphill a short distance through an area of very large boulders to the lower falls, seen below (from a prior trip with no snow). There is a good bit of room for hanging out an enjoying the scenery. The uppermost parts of the falls might be obscured from view when the leaves are on the trees, so I’d recommend going before the winter is over. In very cold weather, I bet lots of ice forms on and around the falls: 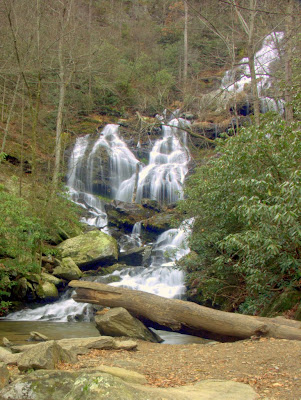 Now from here, there is a scramble path that leads up the right side of the falls. There is a sign warning you not to go that way and let me tell you – heed the sign. It starts out steep, gets steeper, and eventually gets so steep up some rocks that there is a rope in place to help numbskulls (like me) who go up there anyways keep from getting killed. Because that’s what will happen if you slip – you’ll tumble down the path and off the falls. Not only is it steep, but it’s narrow, with a sheer drop-off into the creek.

So why would anyone even bother climbing this path? There are some pretty neat (scary?) views of the lower falls from up there, but the real reason is to reach the upper falls – which are about 5 minutes upstream from the top of the lower falls. The upper falls is really nice, but until a better path is established, I can’t recommend anyone attempting to reach them. So I got a photo for you: 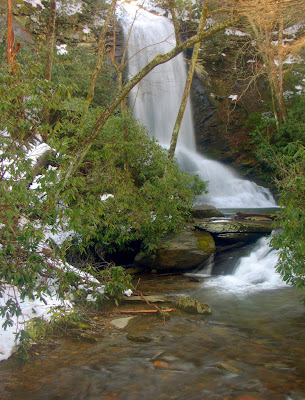 So from the photo you can probably see why people would want to haul themselves up the mountain. It is such a beautiful waterfall, but the trail up there is so bad that I’m torn as to whether I’d even go back that way to reach them.

I’ve added Catawba Falls to NorthCarolinaWaterfalls.info, and I’m considering adding it to HikeWNC.info as a Best Hike also. But for that, I’ll probably wait until the Forest Service buys the land near the trailhead, making the “temporary” access more permanent.