In response to my post about the new observation platform atop Mt. Mitchell, Allen said:

“Now that the old 45 tower has been replaced by the observation deck on Mt. Mitchell, is a person standing on the Clingmans Dome tower in the Smokies at a higher elevation, or does the Mt. Mitchell deck still put you at a higher level? In other words, how tall is the deck above the mountain top?”

Good question! I figured this one was worth a little bit of research.

The summit elevation at Mt. Mitchell is 6,684 ft. and the deck of the new Mt. Mitchell platform is 12 ft. above the mountaintop (according to the Asheville Citizen-Times), so the elevation of your feet when standing on the platform would be 6,696 ft. Now the summit of Clingman’s Dome is said to be 6,643 ft. According to Brittanica, the deck of that tower is 54 ft. high. So if the base of the tower is right at summit elevation, that puts the deck at 6697 ft. Which means that you’re now standing 1 foot higher on the Clingman’s Dome tower than the Mt. Mitchell observation platform! 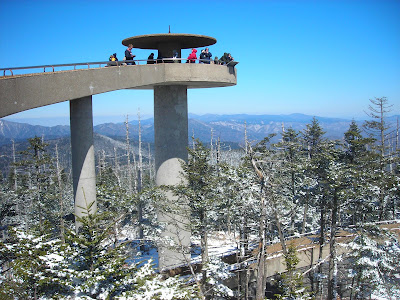 Are these folks now standing higher than people on the platform atop Mt. Mitchell?

That would be a bit of justice finally to Mr. Clingman, I guess, considering the famous dispute between he and Dr. Mitchell regarding which mountain in the region was higher. But of course, the figures above might be just a hair off. In fact, I recently read that one new satellite-based measurement of Mt. Mitchell put the actual summit elevation at closer to 6,710 feet. (I need to find that article again, so don’t quote me on it).

Now these figures are so close, in the age of data and technology I think we need a better way to come up with a winner than just adding up numbers that “The Officials” have told us to be true. So let the new quest to find the highest tower begin! If anyone cares to get some GPS or altimeter readings on both towers, I’d be interested in seeing what they said. The more readings, the better. Both barometric altimeters, and actual GPS measurements. Make sure the unit is on the deck of the tower (the part you stand on, not the railing) when getting the reading. Come back and post it in the comments here, along with as much info as you can – device used, date, time, and other information such as calibration point. If we could get multiple readings by multiple people that we could average together, that’d help correct any aberration in any given unit at the time the measurement was taken. And use the same device for both readings, calibrated to the closest USGS benchmark or known elevation you can find. And if anyone wants to pull a tape up there and confirm the heights of the decks, that’d help too. We’ll collect the readings and start to see which one looks like it’s coming out the winner!

Regardless, of the exact measurements, they’re both literally within a stone’s throw of each other in height (as is Mt. Craig at 6,645′, and it has no tower at its top, making it my favorite).  Best to go to each one and enjoy them all so no matter what, you can say you were standing at the highest possible (albeit man-made) point in the Appalachians!