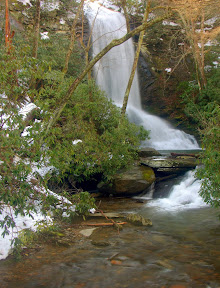 Momentum in the Catawba Falls access issue has finally come to a head, with the recent sale of two parcels of property totalling 88 acres to the US Forest Service, officially making the access route to the falls public property, which literally took an Act of Congress, the 2010 Interior and Environment Appropriations bill.

For many years, visitors have accessed the falls on an old road over the tracts of private property. The falls themselves have been part of the Pisgah National Forest for years, but the only way to access them was over the private land. Although trespassing is never condoned, in this case it was generally not restricted. Luckily, the Foothills Conservancy was able to acquire the land after it went up to sale recently, and public access was immediately granted under County supervision. All along, the Forest Service had the tract listed as one of its top acquisition targets. Finally, the Forest Service has received funding  to buy the land.

Now, it is being widely reported that the Forest Service plans to build a larger parking area at the trailhead and improvements to the trail, including a footbridge over the fledgling Catawba River (more of a medium-sized creek this high in the mountains). This should make accessing the lower falls much easier, although there is no word on the steep, dangerous access to the upper falls. Until that part of the trail is improved, I still don’t really recommend it for most people, but this news marks an exciting chapter added to the book of public lands with spectacular natural features in Western North Carolina. All the more reason to get out on the trail!

I’m sure I speak for lots of people when I express deep gratitude to all the people who worked so hard for so long to make this possible. Conservation is a contentious issue, but I believe that time will prove what an important and wonderful asset this, and other similar efforts, have produced for the citizens of North Carolina and our country. Thank you, everyone!

Here are some references to the news stories mentioned. Keep in mind that these sites tend to deactivate their pages a short time after posting them: