It looks like the Brushy Ridge logging project will be getting underway soon, and during that time, the entire North Mills River area will be closed to public access. A post on the NC Wildlife Resource Commission’s web site alludes to the closure and that they won’t be stocking fish.

Edit Feb. 4: the Asheville Citizen-Times has articles this week about the closure, and the official Forest Service press release was also sent out. It’s below.

Edit Feb. 22: the Forest Service has released a handy map of the closure areas. It’s at the bottom of this post.

Some Trails and Roads to Close from February – May

To help ensure public safety during timber harvesting activities the Forest Service will close trails and roads in the Trace Ridge Area of Henderson County in the Pisgah Ranger District, Pisgah National Forest, beginning in early February 2014 and continuing through May 2014. The following trails and roads will be closed during this time:

Trace Ridge Trailhead will not be accessible and the use of the trails and roads is prohibited. Please use caution while traveling in the area, particularly Wash Creek Road as logging truck will be on the area roads.

The Forest Service designed the Brushy Ridge project to fulfill management objectives in the current Nantahala and Pisgah National Forest management plan. This project allows the agency to implement a variety of management activities to improve ecological diversity, as well as promote forest health and sustainability.

The Forest Service’s management practices will:

The Forest Service will implement the second phase of this project, which involves an additional 63 acres, this spring or summer. Seniard Mountain Road (FS 5001) and Bear Branch Trail (Trail 328) will be closed during this phase. The agency will issue a news alert to announce the closures. 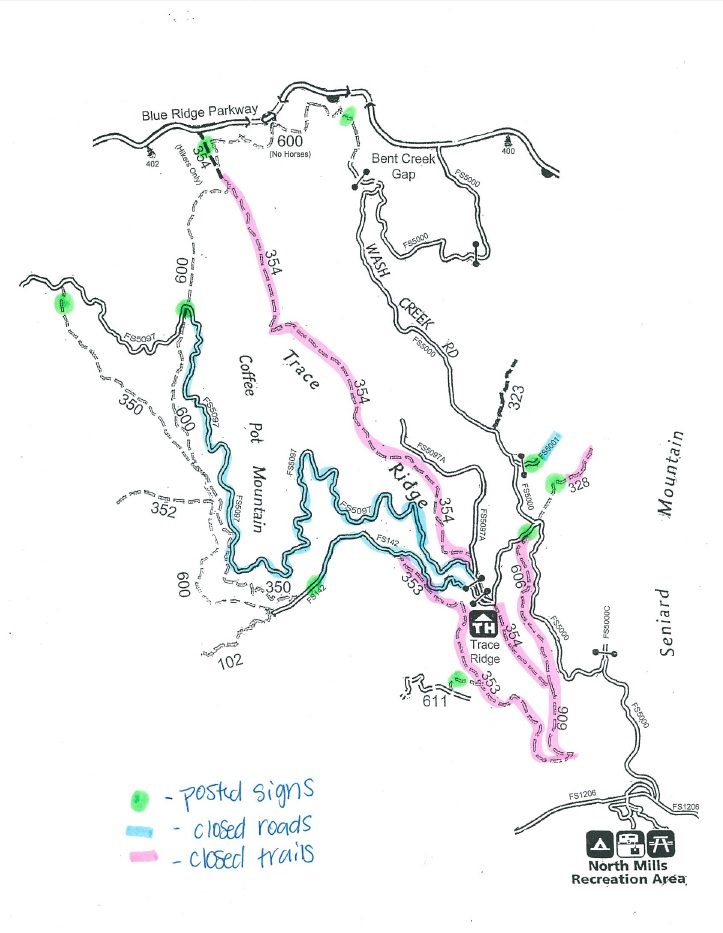