Saturday, I found myself on one of those hikes that has no preparation, no particular destination, nor even an expectation of what I might like to find. I took the family out to the Shope Creek section of Pisgah National Forest, only hoping to get a little exercise and enjoy the sunshine on a warm January day, before cooking a big family meal later on. But after we wound up at a waterfall, confirming its existence (which I had previously suspected from seeing maps and aerial photos), I was glad we decided to make the visit!

The Shope Creek area is relatively new on the list of places you can visit in Pisgah National Forest. Before a logging project in the bottom of the valley, at which point a public parking area was built and the gate which used to block the entrance road was removed, very few people got the chance to hike and explore here – the only section of Pisgah National Forest that dips south of the Blue Ridge Parkway in the Craggy Mountains. Some people still wish the area were a “local secret” as it were, but the cat is well and truly out of the bag now, as the photo of the packed parking area above shows.

I remembered spotting a path leading uphill from the parking area the last time I was up here, away from the primary forest road which goes up along Shope Creek itself. It follows the old skid path they used to take out the logs; before last weekend I never bothered to check it out. Over time, the skid road has started getting some more use, so I decided to see why it was becoming a more well-worn trail over time rather than fading away the way the Forest Service probably intended.

The dirt road/path led gently uphill to the north just west of Wolf Branch. It passed through the clearings and into patches of trees that were left behind, as it angled closer to the stream. As we ascended – gently – a view of the mountains on the sides of the valley started to open up.

The Blue Ridge Parkway is above this area, and the elevation in the clearings approaches 3000 ft. The forest started to resemble those found at mid elevations along the Parkway in the Black Mountains. We passed some neat boulders as the trail edged into a narrower section of the valley.

The “trail” went up and over a number of mounds designed to check erosion, but was otherwise easy and in good shape. (For now, anyway. This is a typical fall-line skid-road-turned-trail, which tend to become erosion disasters if they start getting more and more traffic without maintenance. Pity.)

The forest on the slope to the right begins to resemble a more mature one, with mountain laurels filling the understory. 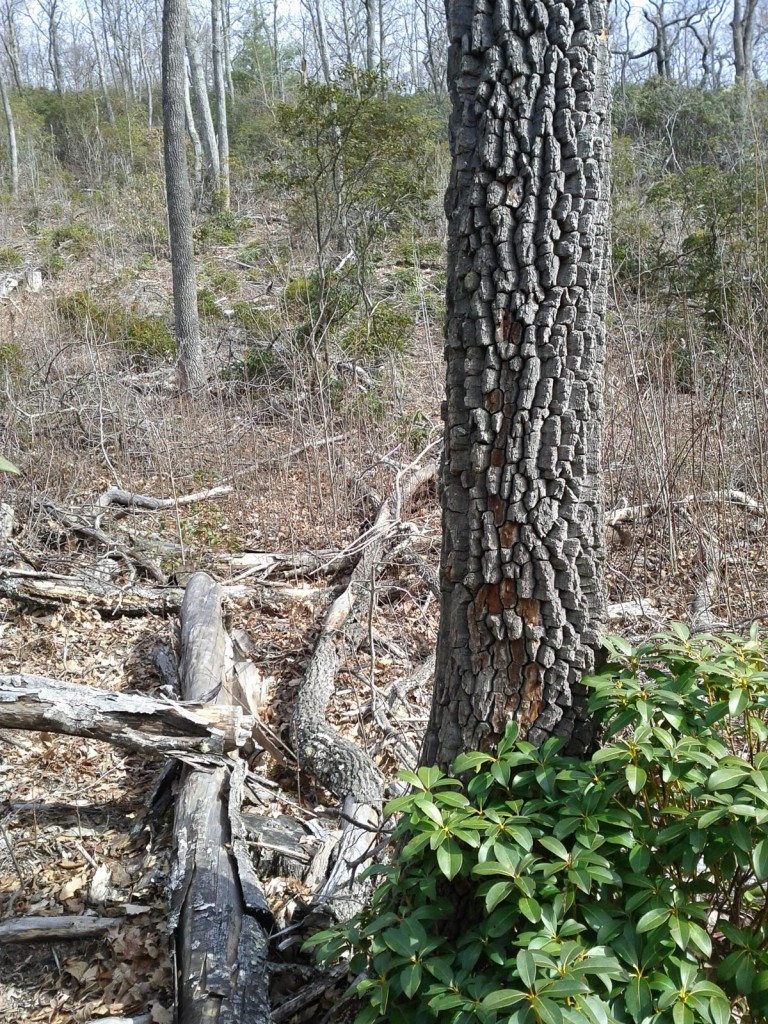 As we approached the upper end of the second main clearing, I remembered seeing an interesting feature on the map last time I looked in this area. The “kink” in the terrain, clearly visible on the map and satellite images, led me to believe a waterfall was there. It would be along Wolf Branch, not too much farther upstream from where we had made it to already. Were we close enough to confirm it? I had to find out.

At the very top of the clearing – where the skid road ends – a sign is nailed to the tree proclaiming “Gecko Loop”.

It didn’t look like there was much of a trail in the direction the sign was pointing (to the right), and I’m pretty sure the Forest Service has not authorized any trail building in this area. (In fact, I’m certain of it). So take heed and don’t follow (or add to) the flagging that’s been tied to the laurels heading straight up the ridge. Even if that were an authorized trail, that’s not a good line for it.

Instead, we went left, onto a more reasonable route leading gently uphill through the uncut forest, above Wolf Branch. By contrast, this path – just a strip of trodden leaves, really – is already close to being an acceptable trail without any formal construction at all. The sound of rushing water kept me going, and sure enough – in just about 5 minutes, after a short section that got a wee bit steep (but not too steep for my 5-year old daughter) – I was standing at the bottom of a little 25 ft. waterfall on Wolf Branch. Confirmed!

I briefly wished I’d brought my real camera, until I looked at the waterfall again. Maybe not the best subject (especially not in bright sunshine), so this smartphone shot will have to do for now. Although this is definitely not one I’d recommend going out of your way to find, it’s quite easy to get to, so you might as well stop at it if you’re in the Shope Creek area doing some exploring. It would look better after plenty of rain on a cloudy day, but I imagine it dries up to a mere wet stain during the summer months. It took us maybe 20 minutes to hike to the falls, with a 5 year old in tow.

Edit Feb. 10: I couldn’t help going back to get a better picture, and ended up doing just that as well as having a whole adventure the following weekend. Read about it here!

I’m not sure if the waterfall has a name, nor if it really even needs one, but someone I talked to who was also there said it was called “Casita Falls”. Maybe it’s just a “Waterfall on Wolf Branch”.

More importantly perhaps, if enough people decide to take in the waterfall and other sights like it in the Shope Creek valley, the Forest Service will have to recognize that there is a need for trails here. Like I told them back in the Trails Strategy meetings back in 2012 – an idea that was roundly rejected. If trails aren’t formalized, then instead of becoming well-designed and maintainable routes for exploration, these “pig paths” are going to become management nightmares contributing to soil erosion and habitat loss. As I predicted years ago.

But they’re not going away, and I don’t see the sense in not getting ahead of the problem and designating a trail network before that happens.

Anyway, on the way back down I noticed some neat ice hanging on the rocks across Wolf branch that I’d missed seeing on the way up.

And we got a nice view back toward the mountains on the other side of the valley.

We’ll be posting more specific information and directions to this waterfall and other destinations in Shope Creek soon. There’s more to explore here – at least one more waterfall, some more nice trails, and potential views on the ridge lines. The area is really a gem, and it’s close to Asheville, which will only contribute to its popularity. If you decide to visit, please send a comment to the Forest Service about the current Forest Plan Revision project and tell them you’d like to see more formal trails in Shope Creek! 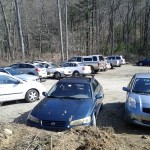 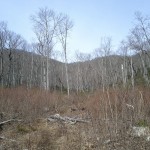 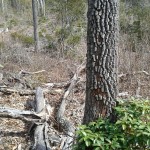 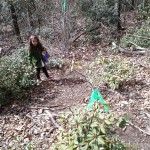 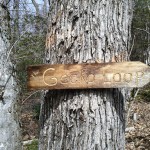 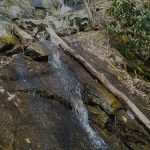 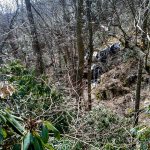 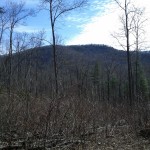